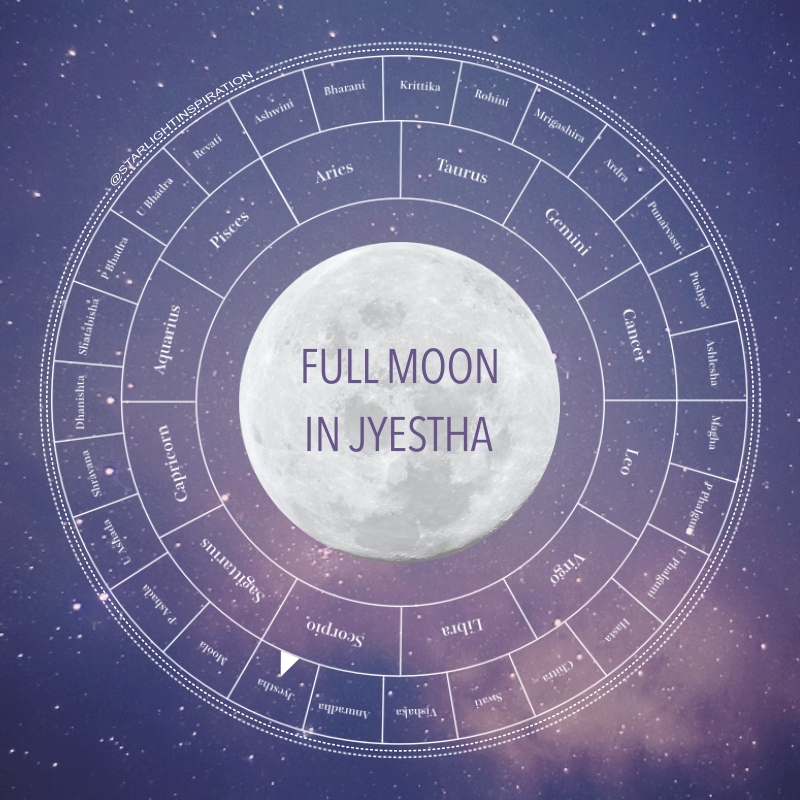 This Full Moon will be in the nakshatra called Jyestha, the oldest, mythologically the oldest of the Moon’s 27 wives and is accordingly often depicted as an old lady. Jyestha is often called ‘the elder star’ and brings to mind an old medicine woman, experienced and skilled, devoted to the mystical teachings of this world.

There is also a fierce and potentially bitter energy to this nakshatra, as Jyestha represents a wife that the Moon neglected, a woman scorned you might say. With Jyestha residing completely within the sign Scorpio, a sign that represents the occult and the under-worldly, there’s definitely a sharp, bittersweet quality to this nakshatra. This is also shown in part by its deity, Indra, the demon-slayer, the king of gods who fell from grace.

The planetary ruler is Mercury, bringing a sharp mind and quick wits to this nakshatra. This mental acuity is often directed into deep analytical and detective-like pastimes, diving deep into any potential mystery. The symbols for Jyestha is an earring or an umbrella, adornments which in the past represented accomplishment and power.

During this Full Moon, in the last degree of Scorpio, the Moon will be in ‘gandanta’, a karmic knot, which is the phenomenon where a planet crosses over the end of a water sign and the beginning of a fire sign. On these specific points, when the end degree of both nakshatra and sign align means that there is no ‘abridgement’ between one sign and the next, creating a less smooth, more turbulent, crossing between signs.

This means that, seeing as the Moon represents our emotions, this Full Moon and the subsequent crossing of the Gandanta point, can make for some emotional turmoil where our emotions run riot during the days surrounding the Full Moon, and we can also feel more sensitive or on edge than usual. There is also an added risk for jealousy and bitterness with this nakshatra, so keep that in mind during this Full Moon as well.

❧ Is there something annoying or bothering me in my daily life, that I need to transform?

❧ Is there something I’m resisting, or do I accept change?

❧ Do I give myself enough time for my own daily practices, to heal and recharge?

If you’d like my monthly transit reports straight to your inbox, sign up for my newsletter by the form here!